Howl with joy when you pocket big wins in the Big Bad Wolf online slot by Quickspin which, in addition, boasts a prosperous RTP of 97.34%. 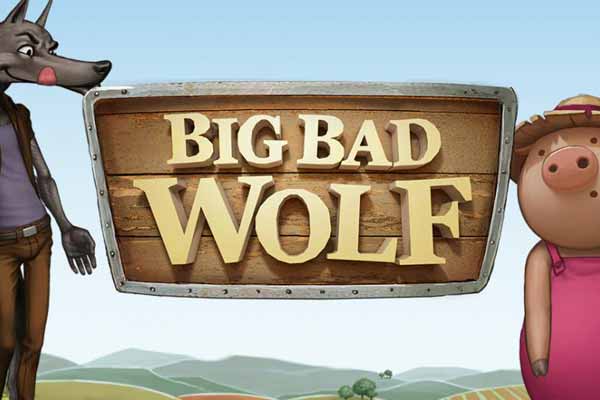 There are plenty of fairytale and nursery rhyme-themed slots out there at casinos. You have even got a few Three Little Pigs-inspired games to choose from. What makes Quickspin’s Big Bad Wolf stand out from the pack is the use of a high RTP rate (97.34%) and a unique and original array of features that are fitting to the original story and theme to boot.

Despite debuting in 2013, Big Bad Wolf still looks visually impressive, and its animations have not really lost any of their touch. While today’s games may use cascading reels, Big Bad Wolf was a touch ahead of the competition back in the day, using what they call swooping reels to much the same effect.

What to Expect with Big Bad Wolf

Big Bad Wolf may feature a 5-reel and 25-payline setup, and while there is nothing unique about that, the layout and design of those reels are undoubtedly thematic. Each symbol represents a wooden crate or a character, with the reels themselves set inside a straw house. Above the reels are three wild counters, and these will come into play during the bonus features. 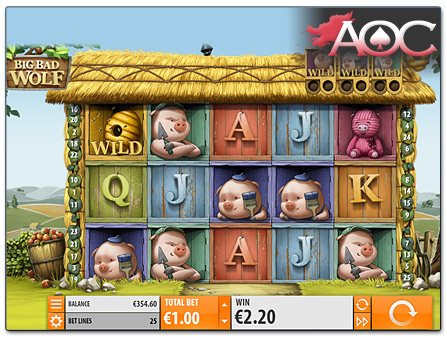 You will get a reasonable degree of flexibility with the wagering range in Big Bad Wolf. Stakes rise from $0.25 up to $100 a turn. Prizes are capped at a more than respectable 75,000 credits. While the slot is highly volatile, it also sports a top RTP rate, one of the best in Quickspin’s collection. At 97.34% (a house edge of just 2.66%), it also compares favourably with other top online slots.

As touched on, there are other Three Little Pigs-themed games out there, but this one is a class above the rest on account of its features. You will have swooping reels, several types of wilds, and a free spin bonus where the infamous wolf will attempt to blow down houses to bolster your wins. We will revisit these features in greater detail in just a moment. 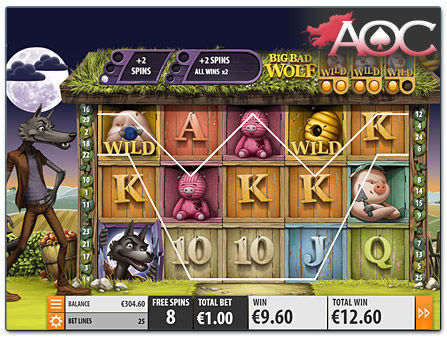 What the heck are all these terms about? Cascading, collapsing, rolling, tumbling and swooping reels? Or how about the feature known as “Avalanche” as is the case with Gonzo’s Quest by NetEnt? Every slot developer seems to use their own terminology for practically the same feature, so don’t let that confuse you because it ends up being about the same thing. If you are looking for more slot terms, take a look at our casino and slots glossary page. Furthermore, two other top recommendations for games with this feature are Elements, also by NetEnt as well as The Wild Chase by Quickspin.

Big Bad Wolf ticks most boxes. Visually it is still attractive, even just shy of a decade after it first went live. From a special features perspective, there is a lot to explore and prosper from. Stakes are flexible, the prizes are fair, and the RTP is a peach at 97.34%. Few casino players in Asia and Oceania could grumble at what is on offer here.

In the below online casinos you can play the games by Quickspin.

As touched on, there are quite a few goodies up for grabs in Quickspin’s Big Bad Wolf. They include:

Swooping Reels: Also known as cascading or tumbling reels etc. to some, this game’s swooping reels feature can occur whenever a win is found. It will see winning symbols blown away with new ones dropping down to replace them. Its overall effect is that it could lead to multiple wins being landed on a single spin.

Wild Symbols: Appearing as the honeybee hive, this symbol can substitute for all barring scatters.

Scatter Symbols: The titular wolf appears as a scatter and landing him three (or more) times is all it takes to trigger the free spin round. In addition, three or more wolf scatters pay 3x your bet.

Pigs Turn Wild Feature: Bag multiple wins in succession with the swooping reels feature, and the wild counters above the reels will rapidly fill up. When two, four or six circles are filled, the first, second and third pig symbols will become wilds. Although really hard to achieve, this only further increases your odds of landing wins and prolonging the swooping reels mode.

Free Spin Bonus: You will always start the game’s bonus round with 10 free spins, irrespective of the number of scatters you accumulate. The ravenous wolf will turn up and blow down the straw house before you start.

One of Quickspin’s Fairest and Best Paying Slots

If the features do not tick your boxes, then the RTP rate in this game most certainly will. Whereas many video slots have an RTP, which hovers around the 95%-to-96%-mark, Big Bad Wolf goes beyond that. At 97.34%, Quickspin’s game has a favourable return to player rate, making it very appealing to all Asian players who come across it.

Check out our brief FAQ if you still have questions concerning the Big Bad Wolf slot.

How do I top up my Quickspin casino bankroll?

Nip over to your chosen Quickspin casino and sign in either via your mobile or computer. Pop over to the cashier/banking page, and under "deposits", select ecoPayz, Neosurf, MasterCard, VISA or any other Asian-friendly payment method which tickles your fancy.

Enter the total to be deposited and the details linked to your account with that method. Confirm the transaction (on the subsequent screen) to see your deposit arrive in your casino account instantly.

Asian internet casinos may also accept Bitcoin, Ethereum, Cardano and other cryptocurrencies. If yours does, then this could be another way to go. Top Asian sites such as BitStarz and Bitcasino may be worth a punt here, with the former also accepting FIAT currency.

Can I claim a Big Bad Wolf slot bonus?

While Big Bad Wolf seldom plays a part in exclusive casino bonuses, you can often use general free spin and deposit bonuses to play a host of different top slots. Big Bad Wolf may be one of those which is eligible. You could check the game eligibility list in the bonus' terms and conditions, though, as games with high RTP rates such as this may be exempt, or the bets placed on such games may only contribute with a lower percentage towards the wagering requirements. This will naturally vary depending on the online casino you play at.

How do I tell the volatility of slots like this one?

Almost all game providers keep a low profile when it comes to revealing the volatility of their slots. We can't say why either, although Pragmatic Play often makes an exception. It is therefore important to rely on your gut feeling, which most regular players have certainly internalized.

On the other hand, slot volatility is very subjective as there is no actual standard in the industry. For example, a game that is rated as moderately volatile by one developer may be considered highly volatile by another.

Highly volatile slots tend to hold back substantial wins for long periods, often also during a bonus feature (the classic dry spells). In comparison, slots with a lower variance pay out relatively often, although, in the long run, the winnings are relative to the total stake. This gives the player the feeling of "staying in the game longer". Either way, games with a high volatility usually require a bigger bankroll, otherwise, the fun may be over rather fast.