Score wins on as many as 117,649 ways to win in this trademark Bonanza MegaWays slot by Big Time Gaming. 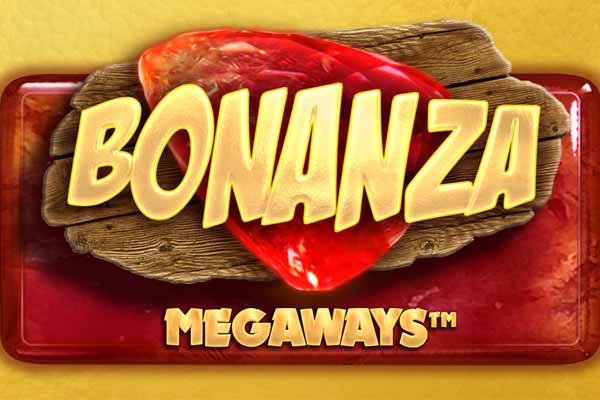 You may be accustomed to seeing MegaWays slots aplenty today, but that was not always the case. Bonanza takes us right back to the founding of the engine and series. In fact, when Bonanza first debuted, it did not have the MEGAWAYS moniker we commonly see attached to the game today. It was simply known as Bonanza.

Make no mistake about it, though, Bonanza is a MegaWays game, and it was one of the first to introduce us to the 6-reel and potential 117,649 ways to win mechanic. Today, its features will be all too familiar to any seasoned slotmachine veteran. However, with cascading reels, a horizontal wild reel, and uncapped multipliers in free spins – not to mention a non-progressive jackpot worth up to 10,000 times your bet – there is still plenty to like about the game.

Potentially Win a Bonanza with This BTG Slot

Bonanza (and the MegaWays mechanic in general) takes a bit of getting used to if you have not tried it before. On each spin, as many as 117,649 random ways to win (not paylines per se) can pop up. As a result, symbols can appear in varying sizes. Having a spin on Bonanza will set you back at least $0.20 a turn, with top bets capped at $20 a pop. 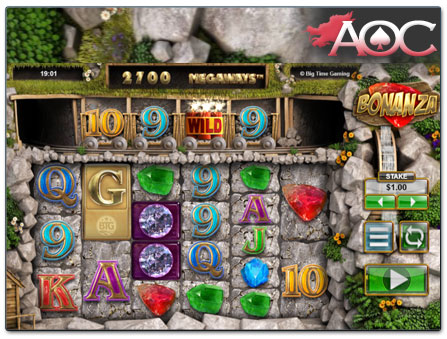 High playing card symbols and jewels dish out wins in this game. The latter are worth considering more than the former and could get you closer to winning the top prize when they appear in abundance on the reels.

Because of how the MegaWays engine works, you do not need to land identical symbols on fixed lines. Bagging them on adjacent reels is enough to denote a win.

By the way, other popular MegaWays slots by Big Time Gaming are Extra Chilli, Monopoly, and White Rabbit, just to name a few. Also check out Danger High Voltage, not a MegaWays game, but still a fun slot based on the Electric Six song of the same name.

Most MegaWays games tend to be highly volatile by nature, and this one is no different (more details on slot variance). While a fair RTP rate of 96.00% ensures that you will get a reasonable chance of success, high variance games such as this tend to pay out less regularly than most slots. However, once a win comes along, it tends to be rather epic in value.

Of course, as in many MegaWays games, there is a cascading reels feature in play here (also called rolling or collapsing reels), like you might find in games such as NetEnt’s Gonzo’s Quest or Play’n GO’s Moon Princess. Every win will see winning icons removed and new ones dropping in to replace them. This will continue until no new wins are formed.

There is also a horizontal reel sitting atop the others. Here, carts can come into play, dropping on the four central reels, and dropping extra symbols, such as wilds into the mix. Keep an eye out for scatters, too, as they can trigger a free spin bonus with uncapped multipliers (more details in the in-game features section further below). 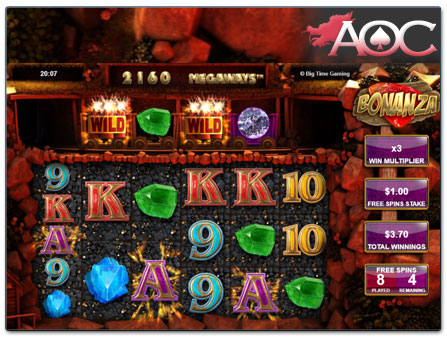 Final Thoughts on This BTG Slot

Bonanza is now one of the older, more dated MegaWays games you can play. There are plenty of top slots that utilise Big Time Gaming’s engine and provide a lot more in the way of features, and winnings. However, it all began with this game.

We certainly do not mind taking a step back into the past to give this game a run for its money because, as we have said, there is still great entertainment to be had. If modern MegaWays slots are too challenging for you (and some of them are quite complex), Bonanza could be just the ticket.

In the below online casinos you can play the games by Big Time Gaming.

The added features you can find in Bonanza include:

These appear as TNT symbols. They usually pop up on the uppermost reel and can substitute for all Bonanza’s symbols, save for scatters.

Scatters appear as G, O, L and D symbols. Naturally, if you manage to spell “GOLD” across the reels, you will initiate Bonanza’s primary bonus. Scatters themselves don’t pay though. A total of 12 spins are given, with every additional scatter offering five more for you to begin with.

You will note that the cascading reels mode is in play during this round, too. The difference here, though, is that when you land successive wins with it, you will increase a multiplier. That multiplier is uncapped. Keep an eye out for gold bars appearing on the horizontal reel, too, as they can add 5 to 10 additional spins to your tally, prolonging the bonus and potentially, your winnings.

If you have questions about Bonanza, perhaps we can be of assistance?

How do I deposit at my Bonanza casino?

Sign into your casino account, and head to the banking page. Once there, you can head to the cashier section and select "deposits". Choose your payment method, enter the amount you wish to deposit, and your banking details. After completing the transaction, your deposit should arrive instantly. Learn more about payment methods in Asia and Oceania.

Depending on where you reside in Asia or Oceania, the choice of deposit methods varies. Nevertheless, conventional payment options such as card or online banking transfers are generally accepted everywhere. However, it is always convenient to have an account with an e-wallet provider as your primary or backup payment option too. Examples are ecoPayz, Neosurf and Skrill (availability is country-specific).

Last but not least, cryptocurrencies are becoming more and more common in online casinos in Asia. One of the big daddies of the online casino world is undoubtedly BitStarz, which of course accepts Bitcoin, Ethereum, Litecoin and other cryptos in addition to real money currencies.

Can I claim a Bonanza slot bonus?

While it is not impossible to find a bonus specifically for use on Bonanza, it is rare. However, there are free spin bonuses which can be claimed that have excellent game eligibility terms, and some of these may be useable on the Bonanza MegaWays slot. Learn more about the individual welcome offers.

MegaWays games like Bonanza are highly volatile. This means that while you can pocket considerable prizes, you could also go on losing streaks for quite a while until this occurs.

As with most highly volatile games, we would recommend that players with a decent chip stack play Bonanza. If you are not flush for cash, we would suggest sticking to low-value stakes if you want to play Bonanza.