Iron Girl brings a style of gameplay to the table which has already found favour in other top slots. With the game’s sticky win feature, you can re-spin the reels to add to your winning combos. 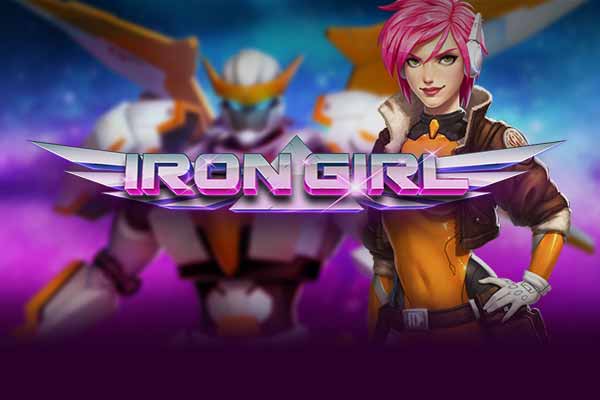 Pop into any Asian online casino, and you will likely find a wealth of superhero-themed slots. That said, Play’n GO are undoubtedly capable of dishing out their own action-packed slots, as Iron Girl clearly shows.

The game stars a pink-haired superhero who battles alien villains across space. The futuristic release is notable for its high RTP rate of 96.70%, its non-progressive jackpot worth over 1,000x your stake, and its sticky win gaming style, which can see you prosper from re-spins that can be used to add further symbols to your winning combinations. This same gaming engine can be found in other popular slots, such as NetEnt’s Jack Hammer series.

A standard 20 paylines span Iron Girl’s 5 reels, and they are fixed into place. However, players in Asia are at liberty to flex their financial muscles with Play’n GO’s traditional slider menu. It allows stakes to rapidly increase (or decrease) in value, with the caps being set at $0.20 at the cheapest and $100 a spin with the costliest bet (or the equivalent to your currency). 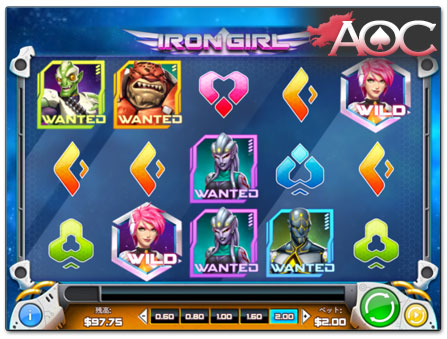 There are eight standard paying symbols which can flash up on the screen during a spin. As with many video slots, the playing card suit symbols are worth minimal prizes of up to 2.5x your stake. The four alien villains are worth considerably more, though, in relation to the amount you bet.

The gameplay in this release is notable for having the same sticky win engine as the immensely popular Wild Chase slot by Quickspin, as well as the Jack Hammer slots by NetEnt. However, with Iron Girl, the main difference is that only one symbol stays sticky and only the high paying ones (the villains), which makes this feature less likely to trigger in comparison. Furthermore, this Play’n GO slot boasts no free spins bonus round.

So, how does the so-called sticky win feature work? Whenever three identical villains or wild symbols appear on any spin, those symbols will be held in place. A re-spin is subsequently granted, and any additional villains or wilds which appear on the reels will be added to the combination which is already frozen, essentially allowing you to expand that combo.

As long as new icons keep cropping up and find their way into your combinations, you will keep prospering from re-spins. 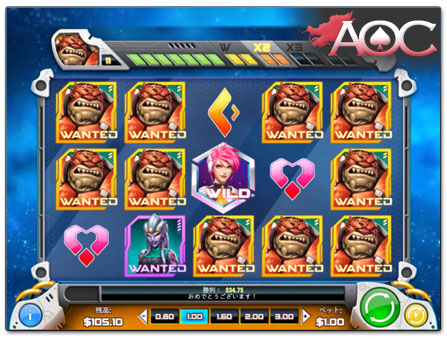 Hint: Sticky wins? Re-spins? Multipliers? Take a look at our casino glossary page to better understand the slot game jargon being thrown at you.

Extra Wilds and up to x5 Multipliers

It is possible to trigger a handful of additional goodies in this Villains Re-Spin feature, too. Once you successfully chain together a combo of 8 villains you can expect to see two extra wilds added to the reels.

Combinations which feature 10, 12 or 14 villains will instantly be given 2x, 3x and 5x multipliers, respectively. When no new wilds or villains are added to the sticky symbol combination, the feature ends.

The most you can win on a standard payline filled with blue cyborg villains is 10x your bet. However, with the 5x multiplier mentioned above, that rises to 50x your stake. If those symbols were to fill all available spots on the reels (so all twenty lines with the 5x multiplier), it would equate to a win worth a non-progressive jackpot of 1,000x a bet.

The Wild Iron Girl and Her Armour

Appearing alongside those villains on the reels is their nemesis, the pink-haired superhero who doesn’t seem to have a name other than Iron Girl. She appears as a wild symbol and can substitute for all other icons in this slot without exception. She frequently shows up during the Villains Re-Spin bonus, making her an immensely handy symbol.

An Iron Armour Bonus could also pop up in this slot, although it does so randomly and to be honest, not that frequently. If your luck is in, though, as many as five wild symbols may appear on the reels, which will naturally help you tremendously in triggering the Villains Re-Spin round. 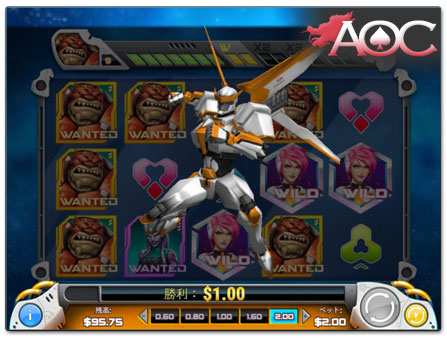 The Iron Girl slot is all about triggering the Villain Re-Spins bonus. Without that, you’re talking about some considerably small prizes, making this something of a medium to high variance release (more details on slot variance).

Admittedly, Play’n GO could have made it a touch easier to trigger the round – it can take some time – but once it is activated, you’re never far away from a semi-decent win, if not an epic one.

Gear Up for a Spin on Iron Girl

As mentioned a moment ago, Iron Girl can be a medium to high variance release. As with all games such as this, you need a decent balance to tide you over during periods where the Villains Re-Spin bonus isn’t activated (alternatively, you may want to try your luck at the Jack Hammer slot by NetEnt instead).

A quick deposit using one of the available e-wallets, accepted cards or prepaid vouchers at your favourite Asian online casino will soon fix that – learn more about the payment methods.

You don’t even have to be stuck with real money since you have the option to do your banking using cryptocurrencies like Bitcoin too. BitStarz is one of the notable online crypto and Bitcoin casinos out there that is worth paying a visit (of course, BitStarz also accepts FIAT currencies).

Get a Helping Hand from Asian Casino Sites

An even better way to ensure that you are well-stocked for betting funds is to claim a welcome bonus from a leading Asian online casino. There are plenty of them around. Just pop into any site offering Play’n GO games (see list below), and see if you can snap up a deposit deal which will help Iron Girl defeat the villains, and get you a touch closer to a decent non-progressive cash prize.

Again, if you prefer using cryptocurrencies, the casino of your choice may even have a Bitcoin welcome bonus in store for you.