One of Microgaming’s online casino flagships, the Norse mythology slot machine Thunderstruck II remains the benchmark for all other similarly themed games to follow. 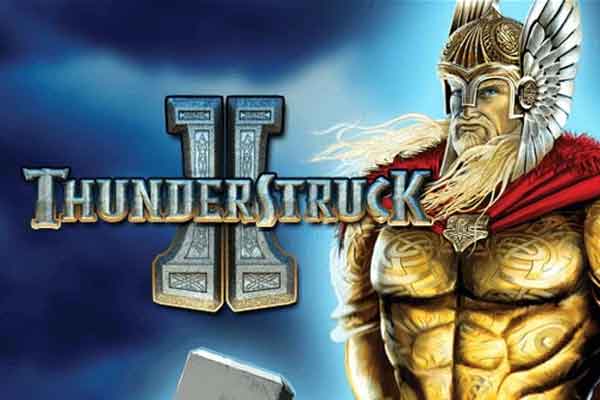 With its top prize of 2,400,000 coins still being the envy of the casino world, and its graphics still being very much impressive, the Microgaming slot scarcely seems to have aged a day.

Gearing Up for Battle on Thunderstruck II – Bets and Payouts

As touched upon a moment ago, Thunderstruck II features the 243 ways to win payline structure (this therefore is a so-called All Ways Slot). It was one of the first Microgaming titles to introduce us to this feature, and its 5 reels can be spun cheaply, even today. Wagers are, at their cheapest, only going to set you back $0.30 a spin. If you wish to crank up your bets, you can get away with a maximum stake on this slot which won’t bust the bank at just $15 a turn.

Today, we like to think that return to player rates of 96% are the industry standard. Thunderstruck II was topping that over 8 years ago. It stands at 96.65%, which for a medium-low volatility game is just the ticket for many players – more details on slot volatility/variance. Prizes worth 1,000 coins per line are impressive, and these non-progressive wins can be yours if you line up 5 Thunderstruck II wild symbols on a line. In this game, having them on adjacent reels is enough.

On a side note, when talking about high RTP’s also take a look at Blood Suckers by NetEnt with a return to player rate of 98%. This is most likely one of the reasons why this game is not available at every NetEnt casino, even though it features the provider’s games library. In addition, you will have a tough time finding a casino site where the bonus wagering requirements will not see the Blood Suckers slot excluded – and dare we say, for the reason of its RTP being pretty lush.

Bonuses and features are plentiful in Thunderstruck II. The wild symbol appears as the game’s title logo. Apart from the obvious fact that it does substitute for any other symbols, save for the scatter, it also doubles a win when it is part of a successful combo. The scatter symbol is represented by Thor’s hammer, Mjölnir. Landing 3 of those anywhere on the screen during the base game spin will trigger the Great Hall of Spins bonus.

Last but not least: Though it only seems to happen once in a blue moon, at any point during a spin, the Wildstorm feature may randomly come into play. This can see up to five reels turn wild, which will play no small role in dishing out decent wins to players. 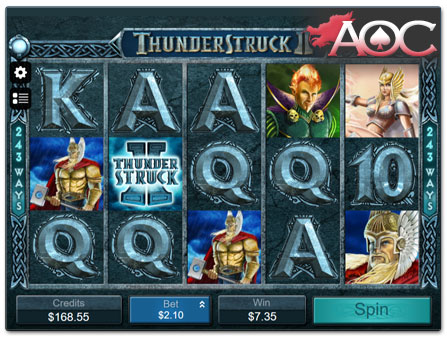 The Great Hall of Spins Bonus Round

The slot’s Great Hall of Spins bonus essentially acts as a gateway to a world of free spins. The first time you trigger the round, you will enter the Valkyrie Bonus, which offers 10 free games with a 5x multiplier applied to all winnings (free spins can be retriggered). However, the more times you enter the feature, the better the rounds become.

Therefore, apart from the Valkyrie Bonus mentioned before there are three more bonus rounds to be unlocked, each with their very own special features. Say hi to the gods Loki, Odin, and Thor:

Entering the Great Hall of Spins a fifth time promises the Loki Bonus. This can offer 15 spins with Wild Magic symbols appearing on the third reel. These can turn other symbols into wilds at random.

Up to 6x Multiplier in the Odin Bonus

Triggering the free game feature for the tenth time unlocks Odin’s Bonus with 20 spins. During this feature symbols can randomly turn into 2x and 3x multipliers. The maximum 6x multiplier is awarded when the special raven symbol lands on the reels twice in the same spin.

Thor Awards You with Rolling Reels and Increasing Multipliers

Lastly, entering the round a fifteenth time activates the Thor Bonus. There, you can net 25 spins with Microgaming’s much-loved Rolling Reels feature delivering increasing multipliers (up to 5x) for every consecutive win landed (more details on slot related terms such as Rolling Reels).

In one way Thunderstruck II plays like a typical PC, console or mobile game where over (quite some) time you unlock achievements. Once all bonus rounds have been unlocked and you win access to the Great Hall of Spins again, you can pick your favourite feature, too.

Thunderstruck II set the benchmark so high that most of the subsequent Norse mythology and Viking-themed slots which have debuted have failed to get anywhere near it, let alone knock the Microgaming slot of its pedestal. Many years later, it is still a must play game; not least if you want to see where these original features came from in the first place. Furthermore, practically every online casino in Asia offers this slot classic both in demo and real money mode – see list.

You will also note that Thunderstruck II and Immortal Romance are near enough carbon copies of one another. If Norse mythology isn’t your cup of tea, but you still fancy the sound of the features and gameplay which appears in this release, then trying the vampire themed, Microgaming slot could also be worth your while.

Preparing to Play the Thunderstruck II Slot with Real Money

Thunderstruck II is one of dozens of Microgaming slots which is open to players in Asia. Topping up your balance with conventional payment methods such as VISA or MasterCard, or e-wallets such as ecoPayz and iWallet is a great way to kit yourself out and get prepared to play the epic slot that is Thunderstruck II.

These payment methods do not charge you for using them, and they offer instant transaction times, to boot. Moreover, when it comes to withdrawing your winnings all aforementioned payment options can be used. In case you are using an e-wallet, withdrawals should take no longer than a few hours (or a maximum of up to one day) to complete.

Remember though that for withdrawals you are required to use the same payment method that you used for your initial deposit. In case a deposit method does not support withdrawals (or the casino cannot effect transfers to it), an alternative cashing-out option is chosen instead.

Boost Your Balance with a Microgaming Bonus

It isn’t often that Microgaming slots such as Thunderstruck II appear in free spin bonuses at online casinos. However, many top sites will allow you to snap up match deposit bonuses and reload bonuses.

These deals can provide you with a wealth of cash (based on how much you have deposited), and those bonus funds can certainly be used to play Thunderstruck II. With wagers being so cheap and the prizes being decent, a promo such as a match deposit bonus can take you a long way with this slot.

In the below online casinos you can play the games by Microgaming.